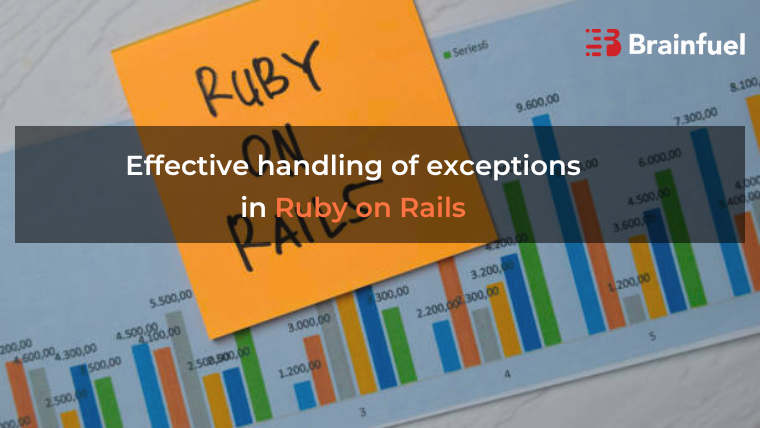 In the software development lifecycle, exception handling is very crucial as exceptions can impact the reliability, functioning, and application performance. There are different ways to handle exceptions in each programming language. In the same way, the Ruby language has its own way of exception handling. It is the developer’s primary duty to be aware of the effective exception handling process as this is a key component of Ruby on Rails development This post focuses on helping developers to know everything in detail quickly and easily.

The statements used are begin and rescue, which is similar to trying and catching in languages like PHP, Java etc. But the exceptions are created using the Raise command.

Once this is executed, it throws a Runtime Error, which is the default error in the Ruby language. To know the exact errors, the developer has to mention the specific class after the raise command. In general, the exceptions are subclasses of the Exception class in Ruby.

This is responsible for effective Ruby on Rails development as it helps the developers to handle errors and build a quality application. Some of the exceptions are  NoMemoryError, ScriptError, LoadError, NotImplementedError, SyntaxError  SecurityError SignalException Interruption StandardError etc. To learn more about it in detail most businesses use the services of expert Ruby on Rails development companies as they explain theoretically and practically in the best way possible. As there are subclasses of a class in this hierarchy like NoMethodError, which is a subclass of NameError, this can create confusion in the developer’s mind. Such minute details are explained in detail with examples to avoid confusion.

By default in the Ruby StandardError class, instances are rescued by wrapping the below-mentioned code in a begin-rescue block.

In the above code, => is assigning the object value to e which is an Exception object. The developer can get the details “class name”, “message” and “backtrace” from e. This helps a developer resolve specific exceptions when encountered in generalizing API responses. In Ruby, multiple exceptions can be handled effectively. Use the below code for rescuing multiple exceptions.

As discussed earlier, the developer can get more details to understand the error in detail, identify the location quickly and figure out the best possible way to resolve it. The below example shows you how to get the values from the exception variable.

The Puts statement is similar to the printF statement; the message helps to know why the error occurs, and the backtrace gives the exact location where the error occurs. This is a best practice that every developer needs to follow while writing code. It can make Ruby on Rails development even more effective and can attract more developers to opt for this language for the web development industry and others too.

Exception handling of Ruby on Rails:

A rescue_form is used for rescuing exceptions that are raised in controllers. This is a Rails feature which is included in the ActiveSupport::Rescuable module. The developer can reuse it easily anywhere in the code to avail of the benefits of a clean and effective exception-handling mechanism in Ruby on Rails. To use this directive, the ActiveSupport library should be downloaded and the module should be included for developers working on Ruby projects. But for Rails projects, the library is loaded already, so ensure the module is included. Use the rescue_with_handler to find the errors raised by the application.

The above code is a reference for developers to use the directive which helps in handling exceptions in Ruby on Rails. The below example explains how rescue_forms helps in identifying the exception and it is rescued.

There are more exception-handling practices in Ruby on Rails, but the ones mentioned above can help developers resolve complicated errors. This looks simple, but it is complicated as we go deep. It is advisable for developers and companies that want to learn more about effective error handling to contact a top-rated, experienced, and professional Ruby on Rails development company. Their help and services are the best in this industry.

BrainFuel is a one-stop solution for Ruby on Rails development. Most businesses utilise the expertise of our experienced professionals to use this technology successfully without any issues.