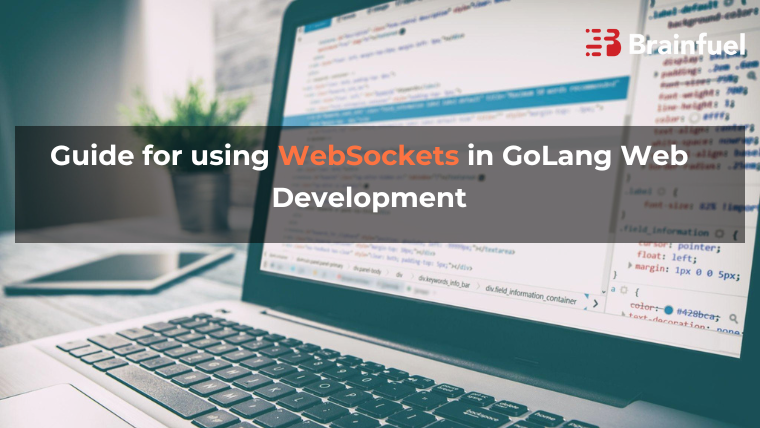 Golang is one of the most popular and most preferred languages for building web applications. In current times, web applications should have the best real-time functioning quality. That means there should be no buffering or lagging when the client sends a request to the server or waits for a response. Most businesses rely on web applications as customers prefer online shopping. If this feature is missing, there are chances of losing customers. To enable this feature, WebSockets are introduced to make the developer’s work a bit easier.

Websockets are replaced by “roll or HTTP polling” to create an interactive session between the user’s browser and the server. It has had a huge impact on Golang web development, as developers can now build WebSockets easier than in other languages. In this post, we focus on how to build WebSockets in Go, which helps in developing real-time web applications for various industries.

It is a vital feature of HTML5 that it creates full-duplex communication between servers. It is built by using a single TCP(Transmission Control Protocol) connection, which remains active till its lifetime expires. It was created with the help of web browsers and servers. It enables the client and server to send the data simultaneously without making any requests. Developers faced difficulty while sending messages when traditional HTTP is used, as many handshakes were used for establishing a connection between client and server.

This problem is solved by WebSockets as they have a special header which has a usage rate of one. Once the connection is established, it allows you to send or receive data faster than HTTP or AJAX, which makes web development even more effective. Websockets communicate with the help of TCP port number 443. Now let us focus on WebSockets in Golang web development.

The Golang standard library does not support WebSockets. But it has a WebSocket package which is a subset of the go.net package through which developers can avail the benefits of WebSockets to build real-time web applications. The important prerequisite to using WebSockets is that browsers should be compatible with HTML 5. To install WebSockets in Go, use the below command:

Once the package is installed, developers can build applications using WebSockets. Developers should always remember to use a secure WebSockets URI scheme as it is a secured and encrypted connection. It ensures the data is protected, which is key for application success. Make sure the port number is 443.

First, as WebSockets are built on top of HTTP, first developers need to finish setting up the HTTP server, which is done by using the below code:

Many developers face difficulties in setting up the HTTP server and initialising the WebSocket structure, especially those who are new to GoLang. They utilize the services of the Golang web development, company as they are experienced in this language. Use the below command to start the server:

The initial handshake is always done by the client. Once the server gets the WebSocket request, it should reply with a handshake response. It is very important to know that developers cannot use HTTP. ResponseWriter while writing code for a response once the request is initiated by the client. The problem is that once developers send the response, the TCP connection is closed. So it again takes us back to the method of HTTP polling. Instead, use HTTP hijacking as it allows developers to pass the TCP connection. The handshake is completed once the server responds with the appropriate headers. Every developer should be aware of the below information.

Sec-WebSocket-key is a randomly generated key which is base64 encoded. Developers need to append this value to the string once the request is accepted. Once it is appended, use sha1 to compute the value and use base64 to encode the value. That is used as the Sec-WebSocket-Accept response header value.

Once the handshake is completed, the application developed using Golang can read and write the data to and from the client. A standard data frame format is used between the client and server for communication. It is defined by the WebSocket specification. It is important to use the frame effectively as it is complicated. Decoding the payload is a bit difficult as it is vital for this step. But it becomes easy for developers by tying up with Golang web development, companies or consultants as their approach, understanding, and experience help in completing this step with ease.

After closing the handshake, the basic setup of a web application in Websockets is ready. We need to write code for sending and receiving messages between client and server using HTML, Javascript, and the Go language. Developers can make use of WebSocket libraries such as STDLib, Gorilla, Gobwas, GOwebsockets, etc. to build effective and top-quality real-time web applications.

Websockets can create a huge impact on the modern-day web development industry like Golang web development, with the rise and demand of HTML5, a full-duplex communication feature.

Brain Fuel is a one-stop solution for Golang web development. Our professional services help companies build quality and impressive web applications  with the latest features like real-time functionality that help them expand their business and earn more revenue.

Is Python better or Php for web development in 2022?