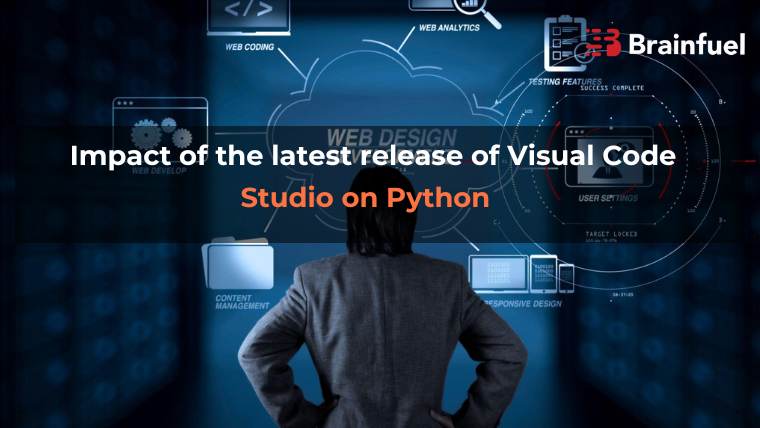 Python is one of the top, most popular, and most preferred languages in the software development industry for its top features, tools, extensive library list, application frameworks, etc. It is the most preferred language for developers because of various factors to begin their professional careers in current times. Coding becomes easy and fun when you prefer Visual Studio. Out of many IDEs available, Visual Code Studio is among the top two that make Python web development smoother, easier, and more effective. It is very important to choose the right software or IDE for programming.

It is a powerful IDE suitable for Python on Windows, MAC, and Linux. This is an open-source platform, which enables developers to use it freely and explore various features to decide whether it is good or not. Visual Code Studio is compatible with Python versions 2.7, 3.4, and above. Top features like code completion with IntelliSense, linting, debugging support, code snippets, unit testing support, etc. make it easy for developers to work without any worries.

The best thing about Visual Code Studio is its constant releases, which make Python web development easier and help developers build top-quality, scalable, highly secured web applications for different businesses. In a similar fashion, Visual Code’s latest release in October 2022 created a huge significance in Python web development. Let us focus on key features of the release in detail and how it makes developers and other team members work easier.

This new feature has simplified the process of setting up a project, which is very useful for developers, especially those who are new to Visual Code Studio. The new create environment command made it possible. Before this command, the user has to finish a few steps to create either a virtual or Conda environment for Python’s workspace. But the Create Environment method automatically creates this environment, which saves time.

Use the command palette to initiate this command by pressing (Ctrl + Shift + P or  or ⌘ + ⇧ + P). Once you trigger the command, you can select a new virtual environment or condo environment depending on the project requirements. Then select the desired interpreter. It also installs required packages for projects like requirements.txt, project., and environment.yml, which are located in the project main folder. This new feature helps to follow best coding practices, which is a very useful thing in the development industry.

It is an extension used in Python that is an open-source static typing tool used for accurate and fast auto-completions and type-checking of code. It can save time for developers as they won’t have to write the entire line. The latest features of Pylance in the Visual Code Studio release include, exclude, or ignore. You have the option to choose which file path or directory is included, excluded, or ignored in a project for a clear Pylance output. For more details, see the settings panel. Use python.analysis.include for more information. You need to replace the last word with exclude or ignore when required. This feature might be difficult to understand and its impact on best coding practices for beginners. It is better to seek professional help from experts in the Python web development industry.

Autopep8 in vscode automatically formats the Python code to conform to the PEP8 guide style. The code written should follow regular standard formatting rules as it helps to track, debug, or make changes when errors occur in a program, especially when there are plenty of lines of code. Autopep8 can fix most formatting issues triggered by pycodestyle. The vscode extension library got one more friend, Autopep8 of Python. It uses the Language Server Protocol, which provides formatting support. There is no need to install it in the Python environment as it is already added to the extension library. You can download the extension once from the marketplace and use it in every Python project.

Cells in Python are used as comments when you are working with files in a Python project. The symbol “#” is used to denote cells in files. The latest release of VS Code Studio enables the cell folding feature, which means the block of code written between % and %% is collapsed. This helps developers navigating the code in a file. Working with files was a bit complicated earlier inVSeCode Studio,o but now it is easy with the inclusion of the file cell folding feature.

With the inclusion of new features, you can add tags and parametrize notebook cells without even opening the JSON format of the document. This can be done directly in the notebook editor of VScode. It is similar to the Jupyter notebook. To know the importance of this feature, most developers prefer a strong community or extensive documentation, which helps in implementing it better.

Developers can set the Pylance check status to off, basic, or strict. This can be done by changing the language status button found at the bottom of the editor. If you select the strict option, both the basic and off-checking options are activated. In strict mode, all kinds of checking rules are followed with high severity to ensure developers follow best coding practices.

BrainFuel’s Python web development is a one-stop solution for designing and building web applications. The services offered by Brain Fuel help any company to generate huge revenue in their respective industry, as web applications are a must for any business. Our expert professionals help your company with implementing the latest and updated tools and software with no issues.

Is Ruby on Rails still relevant in 2022 for the web development industry?

Flutter vs React Native: Which is a good choice in 2023