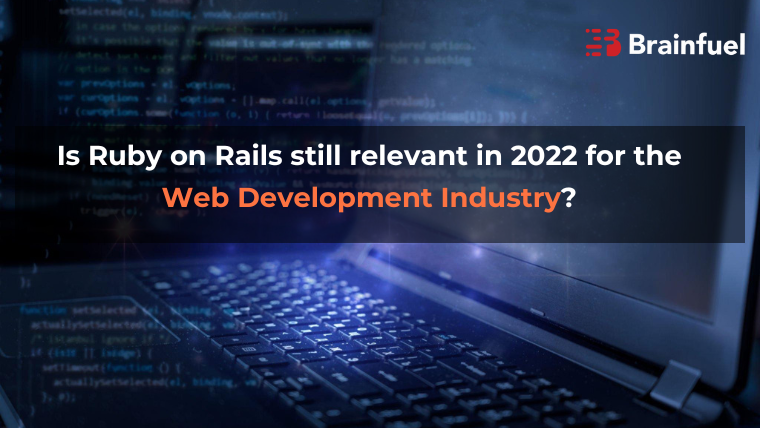 In the software development industry, new programming languages and technologies are used by developers to meet the new industry standards and demands set by business experts. That doesn’t mean old technologies become irrelevant, despite the fact that they are still relevant in the development industry, unless the official team members do constant changes and regular update releases that meet the new trends of the industry. Today we focus on one old language, Ruby on Rails, to see whether it is relevant in 2022 among the latest and most popular technologies like Python, R, Java, React Native, etc.

No doubt, Ruby on Rails is one particular language developers prefer for web development projects because of its unique features and tools. Most top companies like Airbnb, Shopify, Fiver, etc. are perfect examples of why Ruby on Rails development is their favourite choice for developing websites. Despite this, there are many questions in mind, especially for new developers, about whether it is the right choice to learn Ruby on Rails in 2022.

A glimpse of Ruby on Rails:

The first version was released way back in August 2004. In 2005, RoR created an impact on web development with unique features like seamless database table creations, migrations, etc. that helped in the rapid development of web projects. In its 18-year journey, RoR has held its place in the development industry mainly because of its gems, which are not available in other languages.

Though there has been a dip in the last three years, the official team members are constantly working to make web development easier and simpler for developers and help businesses expand their network and brand with efficient, quality websites. The latest version of Ruby on Rails is 7.0.4, released on September 9, 2022, which is one big reason to say they are still in competition with other languages. Ruby on Rails development is perfect for developing e-commerce, online portals, social networking sites, travel sites, etc.

Is Ruby on Rails Dead?

There are various articles titled “Ruby on Rails is dead” or “RoR is irrelevant in today’s time,” etc. That doesn’t mean it’s the end of this language. This happens with every technology, especially when they have been in the industry for a longer period like Java, C, C++, etc. What you read in those articles is a perception formed from various experiences with Ruby on Rails development. You should form an opinion once you look at all possible angles. To clear up these confusions, let us focus on a few factors and features that make RoR still relevant or not.

Reasons to say why Ruby On Rails Development is relevant:

RoR is famous for its rapid development process. Developers have to write less code when compared to other languages because the RoR framework makes it easier. This gives ample time for developers to focus on what clients need and also work to improve the customer experience, which is very important for any business. The functionality, quality, and security features of an application are not compromised even if developers write a few lines of code.

Ruby on Rails development becomes easy, effective, and smooth with the use of Rubygems. There is a huge list of Rubygems for different purposes that are used for developing web applications. Whenever developers find it difficult to develop complex features for a website, then these gems are used as they make it easier. Among various gems, authorization gems are vital in web development as developers can build a strong authorization technique for users while they log on and log off. Rubygems are open source and free of charge.

One more reason is that it supports MVP development, which is very important for any business web application. Its ability to develop complex applications, integrate with third-party applications, and be an object-oriented programming language makes it easier to create an MVP environment. MVP development increases the scalability and performance of an application. It also saves time. Top social networking site Twitter used Rails as a stack for creating an MVP environment, as RoR builds faster than any other languages or stacks.

Ruby on Rails development makes any complicated business logic execution easier and faster than with other languages. This is a beneficial and critical thing when businesses need quick changes, especially when there is less time to meet new trends and requirements. Creating an API is a time-consuming process for a developer. APIs are a key component of web development. But if you use the RoR language, you can develop an API faster, which makes your work easier and quicker.

For any language to be relevant in the industry for a longer period, the most important things are a huge community and impressive documentation. Ruby on Rails has a very strong community, which helps developers seek professional help whenever required. If they want to know about RoR gems in detail, they can look into the documentation, which is written in easy and simple language to understand better and more quickly.

The RoR framework is very flexible and adaptive. Core members constantly work hard to help developers build apps with the latest integrations. The latest version of 7.0.4 offers an improvised approach that favours convention over configuration. Features like active support, active record, action view, etc. improve the scalability, application functionality, and performance. RoR frameworks are best for building prototypes, as they can easily add or remove elements as per the changes required.

To sum up, Ruby on Rails development is still a good choice in 2022. Yet there are a few shortcomings that need to be addressed by the core team to ensure that myths like “Is Ruby on Rails Dead?” and “Is Ruby on Rails Over?” etc. are eliminated. In 2022, RoR is making a difference in fields like cross-platform applications, MVP, software as a service, market places, etc.

BrainFuel’s Ruby on Rails development company is a one-stop solution for designing and building top-quality web applications. The services offered by our expert professionals at Brain Fuel help any company to implement the Ruby on Rails framework in any web project with ease and effectively.

Significance of GIS Technology in the Agriculture Industry

Impact of the latest release of Visual Code Studio on Python