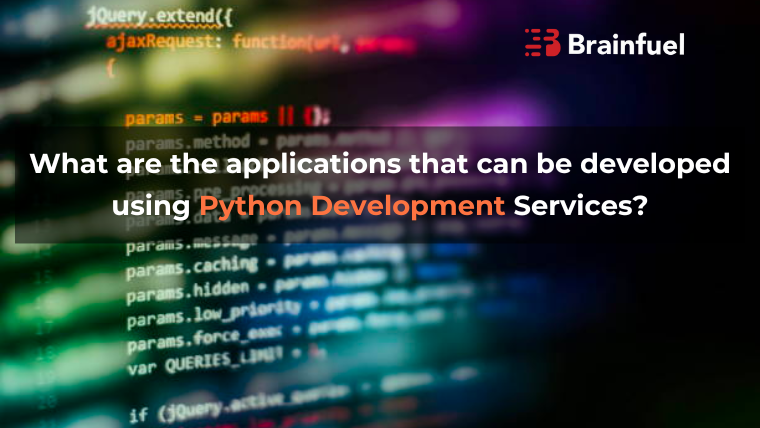 Python is a free and easy-to-learn programming language. Python’s Development Services are well-known as universal, versatile, dependable and this facilitates mistake debugging and supports the rapid development of application prototypes. Having established itself as the language of choice for programmers, Python is the world’s fastest-growing programming language, according to Stack Overflow, and it will continue to grow even quicker in the future.

Being a general-purpose programming language, Python supports cross-platform operating systems, making it much easier to create applications using it. Python is used to power some of the most well-known apps, including DropBox, Youtube, and BitTorrent. Python’s Development Services can be applied to a variety of problems

The types of applications that can be developed using Python are:

Below are highlighted some of the Python Development Services that we offer:

Business Apps differ from standard applications in that they span domains such as e-commerce, ERP, and many more. They need apps that are scalable, extendable, and easy to read, and Python has all of these qualities. To create such commercial apps, platforms such as Tryton are available.

The perfect thing about Python is that it is ideal for developing high-performance custom solutions, whether they are for consumers or for businesses.  Python’s security features will always remain its most prominent feature when it comes to security.

Web Scraping Applications:
The internet contains a vast amount of information that is ready to be used. Web scrapers basically crawl the websites they’re directed to and save all of the information obtained from their web pages in one location.
Python Development Services are a lifesaver when it comes to extracting massive amounts of data from websites and tools such as PythonRequest, BeautifulSoup, MechanicalSoup, Selenium, etc. make the task a lot easier which can subsequently be used in real-world operations like pricing comparison, job postings, research and development, and more.

Web Development:
Python’s code is basic and easy to grasp, which simplifies web and software development services and makes the process more efficient. Python’s interoperability with other languages is another appealing trait, making it a more versatile alternative. Python development services can be used to quickly create web applications and it offers several benefits, such as security, easy scalability, and convenience in the development process.  These frameworks provide common-backend logic as well as a number of libraries that can assist in the integration of protocols such as HTTPS, FTP and SSL,  among other things. Django, Flask, and Pyramid are some of the most well-known frameworks.

How do GIS mapping development services help in crime mapping?

Benefits of eCommerce Development for your business