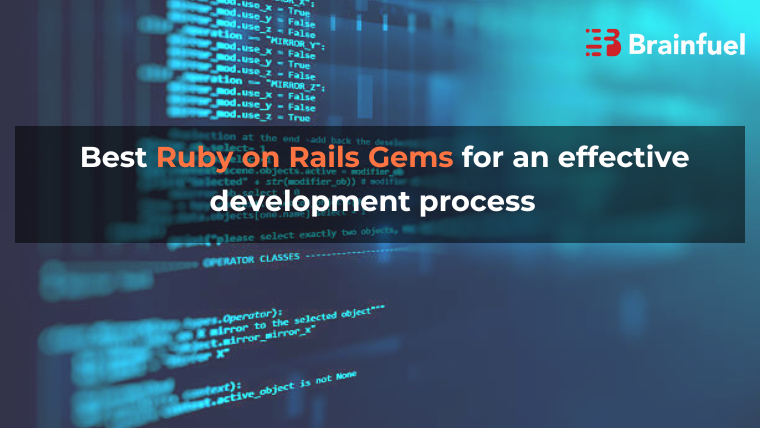 The reason behind this is the gems which make Ruby on Rails development survive even today in the digital era. These gems make the development process easier and more fun, which grabs the attention of a web app developer.

What are RoR gems?

RoR gems are large libraries that allow any developer to make changes as per the requirements without rewriting the code. These gems add value to rail development. These gems can help developers call any plugin for different functions like authentication, payment processing, etc.

RoR gems is a package manager which has a standard format to distribute libraries in the form of gems. A command line utility known as a gem is used to control these RoR gems and help load them.

Some of the best RoR gems:

Let us focus on some of the best RoR gems, which are used by most RoR developers for a better, simpler, and more effective Ruby on Rails development process. Upon that, you can know its demand in the market.

The one must-have for RoR developers is that it aids in debugging issues and eliminates common errors that a developer encounters when attempting to integrate libraries into Ruby on Rails. This gem helps developers to save time and successfully integrate the libraries. Some of its key features are command shell integration, highlighting syntax, a flexible and robust command system, etc.

Developers often face issues while importing data from other sources and uploading huge records. It is hectic and time-consuming work. To sort this issue, the ActiveRecord Import gem was built. It helps in producing multiple SQL insert query statements as per the requirements. Whenever the developer uses this gem, n+1 insert statements can be generated with ease. This helps the developer focus on their primary responsibility to ensure there is no stoppage in the development process.

To help those developers, a Devise Gem has been built, which has 20+ modules. Every module focuses on different aspects of authentication. Some of the modules are Omniauthable, Database Authenticatable, Registrable, Confirmable, Trackable, Recoverable, etc. But one has to spend some time understanding the modules in a better way so that the developer can use this gem. For all the freshers and developers who are new to you, the best place to contact is the Ruby on Rails development forum or platform as the experts resolve every query.

It takes time and effort to write single-unit test cases to say that everything is working fine. There is no bug or error, which ensures the web application’s performance and efficiency are top-notch. To help developers, the RSpec gem was developed, which is a perfect gem for writing unit test cases.

This gem helps developers to test the web application effectively as Factorybot creates dummy records, which simplifies the testing process. Factorybot is a software library in RoR that helps in creating fixtures for automated software testing activities. The fixture objects are created using a plugin called fly.

A gem which is used for critical analysis of code performance in Ruby on Rails development. It gives an idea of whether the web application developed matches the Ruby writing guide style, which is designed for a perfect program. If there is any mismatch, this gem resolves it and ensures it matches the Ruby style guide. It can fix issues like spacing, line breaks, formats, etc.

There are plenty of these gems which contribute in one way or another to helping developers build a web application quickly. It helps the Ruby language to be a part of the crucial programming languages list in the application development process. But there will be challenges in understanding which is the correct gem for your business. In short, RoR gems are the backbone of Ruby on Rails development, which has had a huge positive impact on the web application development process.

Brain Fuel’s Ruby on Rails development company is a one-stop solution for designing and building top-quality web applications. The services offered by our expert professionals at Brain Fuel help any company to implement the Ruby on Rails framework in any web project with ease and effectively.