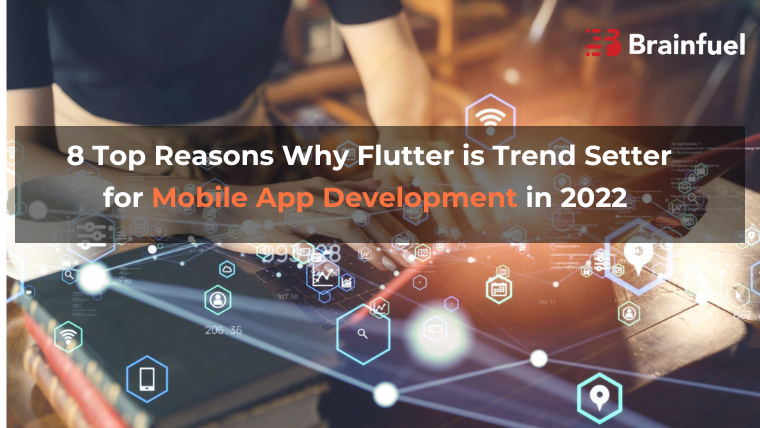 It is perfect for MVP (Minimum Viable Product). Its features help developers to build mobile apps quickly with quality and high security. Approximately 42% of companies prefer this technology for developing cross-platform applications with the help of experienced  Flutter mobile app development companies whenever required. In this post, we will discuss how Flutter is a trendsetter in this industry for the year 2022.

A good design is vital for any application as it can attract more users if the design is impressive. Flutter enables developers to make quality designs with its widget feature and can edit the existing ones for their application. This makes development faster as developers’ work is reduced and they can focus on quality and even customise the designs as per the business requirements.

As Flutter is powered by Google, it has ready-made Google SDKs (software development kits), which makes the development process easy as developers build native compiled apps for websites, desktops, and mobile devices with the same code.

Flutter supports the single codebase feature in which developers write code once and it supports both Android and iOS platforms, which increases the development rate by 40%. Upon that, it saves time and money spent in the development process.

One of the big reasons why Flutter is setting new standards in this industry is its ability to develop applications on the Android and iOS platforms with great speed and high performance, which is unmatchable to apps built with other technologies. Top developers in this industry, like David DeRemer, Topline, etc., said that Flutter is the first cross-platform framework to match the performance of native apps based on their experience.

The apps built using Flutter require less testing as the developers just write automated test cases that work on any platform because of the single codebase feature. The time taken for deploying the apps built using this technology is less as developers can execute all the changes made without losing the existing application. It also improves performance and helps companies make those changes to the applications that meet the business trends quickly. Such companies get an edge to be ahead of their competition.

Flutter has made a huge impact on mobile applications, especially in the sports and gaming departments. The OpenGL package enables developers to access all the highly accelerated graphics, which is possible as all of the renderings in Flutter are supported by the Vulkan API. It helps developers build high-quality graphics for mobile games on both Android and iOS. It has in-built animations which help developers to create high-quality animations, which make sports apps like cricket or football look impressive.

Most developers prefer Flutter mobile app development because they get the opportunity to work on the Dart programming language. Developers often face difficulties while debugging apps built using Typescript or JavaScript, but debugging becomes easy and simpler in the Dart language. Flutter uses this language and compiles it as a single native code. It also improves the speed and performance of the application. Upon that, it is easy for developers to learn as the Flutter documentation is so clear and explained step-by-step.

To sum up, Flutter is undoubtedly the game changer and the first cross-platform framework in the mobile application development industry. The features, in-built SDK, and packages help developers to build mobile apps quickly without any compromise. If you’re looking for a mobile application for your business, then Flutter is the first choice you need to make as it saves time and money. Flutter team members are constantly working to make this technology better and meet the new trends in the mobile application development industry. They can replace the native app development methodology in the near future by adding new packages. To know more about the latest news and be updated, then the Flutter mobile app development platform is the right one.

BrainFuel is a one-stop solution for Flutter mobile app development. Our professional services help companies build quality and impressive mobile applications with the latest features that help them expand their business and earn more revenue.

Effective handling of exceptions in Ruby on Rails